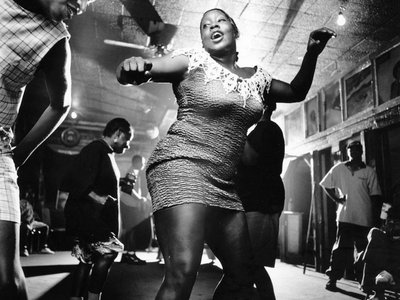 theMOVEMENT is an open-format dance party, inviting residents and visitors of Santa Monica and beyond to enjoy an afternoon of fun, music, and real-world connection with members of our public community. Learn new dance steps with our instructors, move your body while enjoying our DJ's selections, or just watch our invited dancers show off their rhythmic tricks. All levels and styles are welcome and invited to enjoy dance and build community with us; come alone, or bring friends and family.

Produced in conjunction with The City of Santa Monica Department of Cultural Affairs
www.santamonica.gov/arts/meet-me-at-reed

Anacron is a career artist, experiential educator, and 2018-appointed United States Ambassador from Los Angeles. Raised as a jazz musician, breakdancer, and DJ led to his participation to L.A.'s early 90's underground hip hop movement. He launched an early career as a recorded, distributed, published, and touring recording artist, while studying Film production at USC and Columbia, then Music Business at UCLA. He's performed and competed internationally as a member of LA Breakers and Brickheadz dance crews, as well as choreographed dance pieces for television and theater. Anacron established a global collective of creative artists (PNTGLLRYNTWRK), and pursues his passion for building relationships through corporate education and training and event production.
anacron.LA

Knicole Haggins has been featured on world tours, award shows, TV & film, theater, commercials, and music videos. She has worked as a dancer for countless artists, most notably Prince, Lady Gaga, Usher, Ariana Grande, and Chris Brown. Knicole has traveled internationally as a dancer; performing, choreographing, and teaching professionally. She can be found regularly at Edge PAC in Hollywood, Downtown Dance & Movement in DTLA, and Boogiezone Utopia in Torrance.
la.blocagency.com/talent/dance/knicole-haggins

Nikki SooHoo is a professional film and television actress best known for her roles in "The Lovely Bones", "Stick It," and "Bring It On: Fight to the Finish". Nikki earned a B.A. in World Arts and Cultures at UCLA and an M.B.A with emphasis in marketing at Chapman University. Dedicated to finding ways to positively impact the community, Nikki is on the board of the non-profit, Awaken Arts, founded the philanthropic project, #PASSTHETAG, and is passionate about helping people live to their fullest potential.
nikkkisoohoo.com

DJ drtysoap is a resident DJ at Open House, an internationally recognized house dance session in Los Angeles, and co-founder of The Dusty Handclap - a mixtape podcast played around the world. drtysoap’s has lived and performed in Japan, China, Taiwan, South Korea, Hawaii, and the Bay Area; and has performed throughout Asia and Australia. He can also be found performing monthly at the monthly dance party, “Soul Source” in Downtown Los Angeles.
soundcloud.com/drtysoap

Camp del Corazon is a nonprofit that provides year-round experiential opportunities for children and families faced with the challenges of living with heart disease. We provide a free of charge summer camp experience for children ages 7-17 as well as programs that offer opportunities for growth, education, and support for children, young adults, and their families. While celebrating our 25th year, we were honored to serve 377 campers, 55 young adults in the PACE program, and over 250 family members at our educational symposium, The Happy Heart Festival.
campdelcorazon.org

Unfamous Fest was established in 2005 with the intent of showcasing and sustaining significant local artists of varying mediums. For over a decade, the series expanded into a small-scale festival series, produced in local markets across the country and internationally, until taking a reformation hiatus of several years. Reborn in 2019, the UNFAMOUS team moves with the purpose and intention of seeking to connect humans, build relationships, and foster community in the real world. Combining sought-after interests and themes with practiced and proven methods of bonding, we provide fun and growth through experiential and organic processes.

We develop communities around the enjoyment of shared interests to foster human connection.